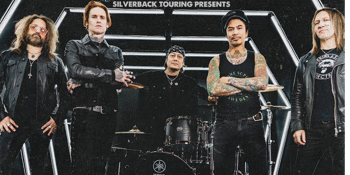 Silverback Touring is going hard in early 2022 and bringing you the ultimate rock show by delivering one of the hottest live bands on the planet, BUCKCHERRY.

BUCKCHERRY recently dropped their incredible new and possibly best yet, album Hellbound and just this week a stunning new video and single ‘No More Time’.

BUCKCHERRY staunchly uphold the commandments of rock music with an arsenal of anthems primed to explode on impact live on stage and teeming with riotous energy, sexy swagger, and primal chops intact.  It’s something that the boys have done since day one, but it’s more necessary now than ever. With an array of classic such ‘Lit Up’, ‘Crazy Bit*h’, ‘Sorry’, ‘Say F*ck It’ and ‘All Night Long’, BUCKCHERRY are ready to once again party down under.