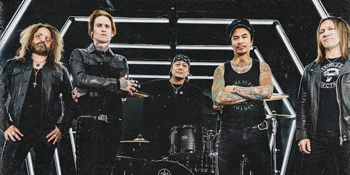 Rich Ward leads the band and is one of the most versatile, talented riff machines & songwriters in rock n roll today. Chris Jericho’s skills as a frontman are second to none and his vocal style & range are both unique and instantly recognizable. The powerhouse drumming of Frank Fontsere is the cornerstone of FOZZY’s sound, along with the blazing solos of Billy Grey and the rock star energy of new bass player, PJ Farley. These are five legit rock stars, whose energy and charisma light up every stage they play on and every crowd they perform for. As a result, it’s no surprise that FOZZY has skyrocketed into one of the hottest rock acts in years.

Proof of vaccination will be required to gain entry into the venue for this performance, so please consider the vaccination status of you and your guests prior to purchasing a ticket.

All measures are taken to ensure COVID-safe compliance including: